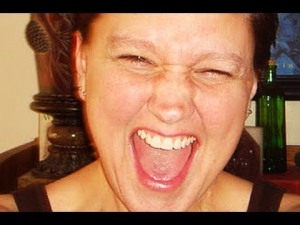 Crystal Cox: “Pay me $2,500 a month and I won’t write false crap about you, call your wife a slut, and go after your 3 year old daughter on the internet! STRAIGHT CASH HOMIE!”

Imagine this…. you Google yourself. To your surprise, a whole bunch of stuff that is blatantly untrue comes up. Being an adult, you call the person who wrote it. This is how the conversation goes down:

“Did you write all that stuff on a website about me?”
“Yup. I’m an investigative blogger journalist!”
“Um, a bunch of the stuff you wrote about me is untrue. Actually all of it is.”
“Oh sure, I know. But I’m a journalist blogger so I can say whatever I want. First Amendment, bitch! But tell you what – I’m also reputation manager. If you pay me $2,500 a month, I’m sure a lot of that untrue stuff would go away.”
“Uhhhhhh… wait a second. You wrote a bunch of stuff that’s untrue about me. And now you’ll only take it down if I pay you?”
“Yup! And if you DON’T pay me it’s going to get worse! I’m going to buy a bunch of domain names that involve you and your family. Not only will I smear your reputation, but I’ll smear theirs, too! I’ll write all kinds of stuff, like call your wife a slut! I’ll even go after your four year old child!”
“That’s extortion!”
“No silly, it’s not extortion! It’s journalism! Investigative journalism!”

You’re probably saying to yourself “nah, that couldn’t happen. That’s illegal. A person could get in a lot of trouble for doing something so irresponsible and probably illegal.”

You may remember Crystal Cox. Crystal Cox became newsworthy when a jury awarded Kevin Padrick a $2.5m judgment against her. Cox claimed to be an “investigative blogger / journalist” whose goal was to expose Obsidian Finance Group and its president. Kevin Padrick sued her for defamation and won. According to some media reports, the judge had ruled “bloggers are not journalists.”

Now, at first, it sounds bad – a financial company going up against poor little blogger who just wants to expose the truth. I can get on board with that. When I first heard about the story, I was kind of outraged. Sure, I’m not a “journalist”, but my blog deserves protection under the First Amendment.

But let’s dig a little deeper, shall we…?

First off, juries don’t typically award corporations huge verdicts unless there is a good reason. That right there is a sign that things are perhaps not as they appear to be at first glance.

So why did a jury see it fit to award $2.5m in damages against Crystal Cox? And why weren’t her posts protected by the First Amendment?

According to Scott Greenfield, the judge found Crystal Cox was not a journalist because:

[T]he uncontroverted evidence at trial was that after receiving a demand to stop posting what plaintiffs believed to be false and defamatory materials on several websites, including allegations that Padrick had committed tax fraud, defendant offered ‘PR,’ ‘search engine management,’ and online reputation repair services to Obsidian Finance, for a price of $2,500 per month,” Hernandez wrote.

The suggestion was that defendant offered to repair the very damage she caused for a small but tasteful monthly fee. This feature, along with the absence of other media features, led me to conclude that defendant was not media.

Here is the Court’s opinion in its entirety.

Right. Crystal Cox basically posted a bunch of stuff that was untrue and then offered to take it down for a monthly fee of $2,500. (which is like, 5x more than my office costs a month and 100x more than is in my bank account). This is the email Cox sent to Padrick’s lawyer:

Presumably, this kind of extortion pissed off a jury, who entered a $2.5m verdict against her. That’s more than many disabled people get in personal injury lawsuits – just ask Max Kennerly. A verdict like that suggests she caused Kevin Padrick and Obsidian some serious damage.

Just one problem — Crystal Cox decided to try her same scam. Again. And to Marc Randazza. And then to his wife and 3 year old daughter when it didn’t work.

And of course, when she bought the domain, she reminded Marc that she offers “reputation management” services, for a fee, of course:

Marc said “No thanks. That’s not very cool.” (Cox posted all their emails on her website, which is how I learned this.)

Cox went on to register:

Too bad it didn’t work. Randazza had a little too much Google juice for Crystal Cox’s brand of crazy to make a dent on his reputation or SEO.

That’s not just crossing the line, that’s taking a giant shit on the line and then setting it on fire while dancing naked on it! You. Just. Don’t. Do. That.

Unless, of course, you’re Crystal Cox. Then I guess you do that…

In fact, to give you an example of just how sick and twisted Crystal Cox is, this is a PDF of a website she made about Marc Randazza’s wife. See it yourself. That’s Crystal Cox’s “investigative journalism.”

Is this what “freedom of the press” was meant to protect, right…? Extortion and attacking three year olds?

Now, you all know my opinion. I’m pretty big on free speech under the First Amendment. If speech makes you mad, counter it with better speech. What I do is kind of sort of akin to journalism.

But there is a huge difference between blogging, journalism, and outright extortion. And that’s what Crystal Cox is – an extortionist. Crystal Cox wants to write a bunch of crap about people and make them pay to take it down as a “reputation manager.” And if you don’t like that, she will try and ruin your reputation on Google. And when THAT doesn’t work, she will go after your wife and three year old daughter. And sadly, Crystal Cox wants to try and hide behind my beloved First Amendment to carry out the scam.

And it ain’t right.

But rather than try and silence Crystal Cox, “[s]unlight is said to be the best of disinfectants. . .” – Justice Louis Brandeis.

So may the sun’s light shine brightly and expose the truth for what it is: Crystal Cox is no martyr. She’s no journalist. She’s not even a blogger. Crystal Cox tried to make a few bucks off extorting people on the internet and calling it “journalism.” And she failed – twice. Then, when Crystal Cox didn’t get her way, she called Marc Randazza’s wife a slut and then went after his 3 year old daughter.

Yes, Crystal Cox is type of woman who picks on 3 year olds when she doesn’t get her way. And she wants protection under the law and your sympathies.

Too bad she doesn’t deserve it.

Now, Crystal Cox probably figures that no one will expose her bullshit for fear of the same stuff happening to them. But to paraphrase Antonin Pribetic, all things must have an obverse.

And the obverse to internet extortion is sunshine.

So enjoy some sunshine, Crystal. You’ve earned it…

[UPDATE]: I incorporated some new stuff based on Popehat’s post. Yes, I continue to steal material from Popehat without even asking permission. Because that’s just how I roll. Snort my taint.

Carlos Miller: Blogger Must Act Like Journalist To Be Treated Like One
New York Times When Truth Survives Free Speech
Forbes: Are Bloggers Really Journalists? Not If They Ask For Money
Defending People: Crystal Cox
Legal Satyricon: How Crystal Cox is Proving the Strength of the First Amendment
The Salty Droid: Crystal Cox :: iS nOt a BLOgGER
Scott Greenfield: A Blogger Not Like Us
Legal Satyricon: Judge rules, again, that blogger Crystal Cox is not a journalist. You know why? Because she ISN’T a journalist.
Popehat: “Investigative Journalist” Crystal Cox’s Latest Target: An Enemy’s Three-Year-Old Daughter
The Fraud Files: “Investigative Journalist” Crystal Cox Attacks Attorney Kevin D. Padrick

This entry was posted on Friday, March 30th, 2012 at 10:47 PM and is filed under Civil Litigation, Crystal Cox, First Amendment, Marc J. Randazza, Marc Randazza, Straight cash homie. You can follow any responses to this entry through the RSS 2.0 feed. You can leave a response, or trackback from your own site.