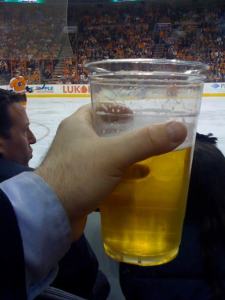 This was me sitting on the ice at a Flyers / Jets game, toasting a Molson Canadian to Antonin Pribetic. Tickets courtesy of Adam Green.

I love hockey. There are very few sports that are as crazy, violent, and fun to watch. There is nothing more fun than watching the Flyers beat down the Rangers or the Devils. You either get hockey, or you don’t.

Which is why hockey fans are some of the most passionate fans in the world.

And yeah, sometimes I get angry with the management and the players. We call for people to be fired, players to be benched, and regime changes.

Even though we can be a little mean to our sports franchises, especially here in Philadelphia, the coaches and the players make a significant amount of money – enough to console their hurt feelings, I would imagine.

Last night I was very surprised to learn that the Maple Leaf’s former General Manager, Brian Burke, filed a lawsuit against several anonymous internet commenters who made anoymous comments about him on hockey message boards.

According to the “Notice of Civil Claim“, an anonymous internet commenter falsely inferred that Burke had an extra-marital affair with Hazel Mae and may have fathered her child. In my opinion, the statement is very obviously parody and not even the stupidest person in the world could actually believe it, especially when you take into account who said it, the hyperbolic language, and the fact it was made on a hockey message board. (quoting the comment verbatim is messing up the formatting of my blog post. But you can click and read it yourself. Thanks, WordPress.)